The power of a well penned letter 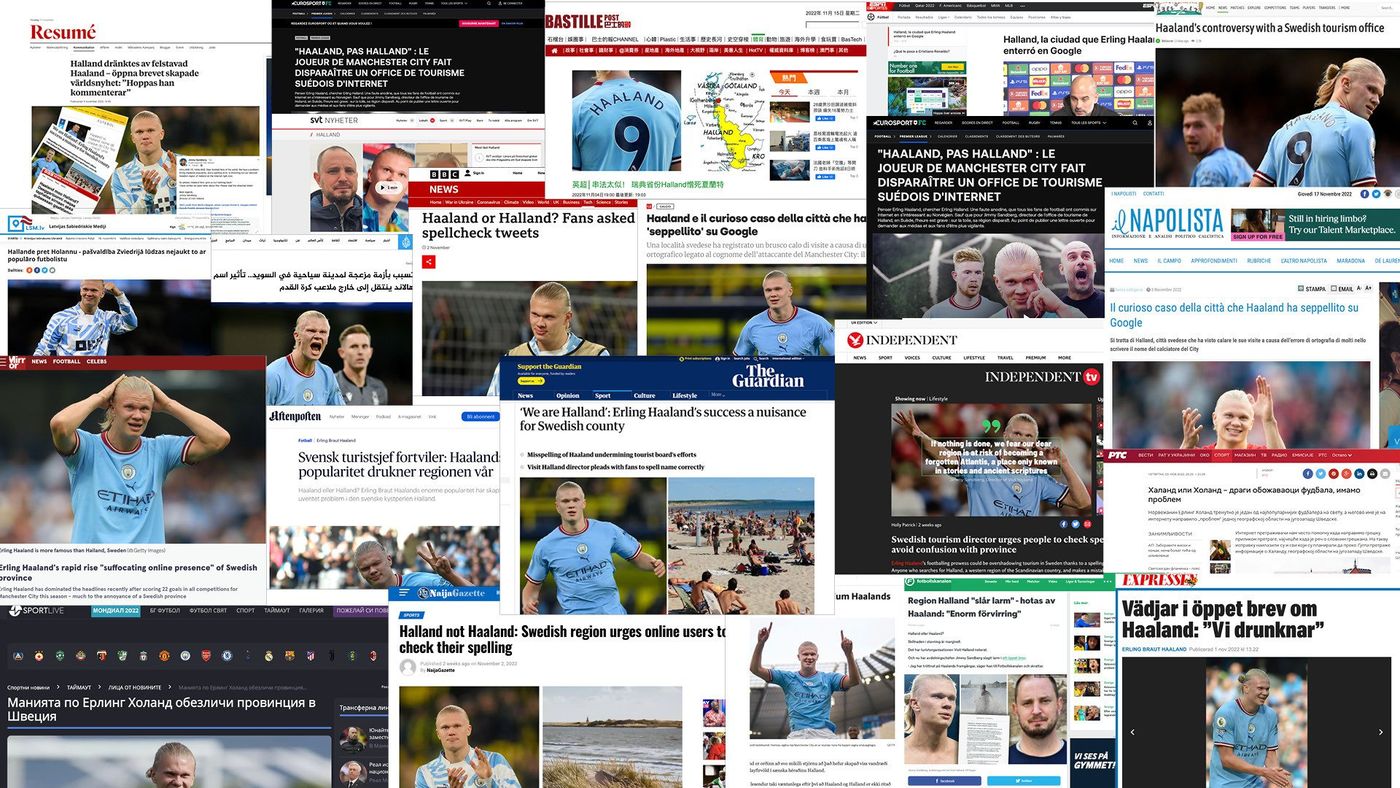 How do you get Al Jazeera, the Guardian, Reuters and BBC to run stories about Halland, a small region on the Swedish west coast? And what does the footballer Erling Haaland have to do with the solution? Spoon content director Peter Hammarbäck tells all in this post about how one letter can generate headlines around the globe.

Halland is not the same thing as Haaland

One day we were searching for photos of the Swedish region of Halland. However, on Google they were surprisingly hard to find. Our search engine even asked us “Did you mean Haaland?”. Same thing on instagram, on #halland, where there should have been photos of Halland’s beaches, forests and cozy cities there were only photos of a huge blond Norwegian guy in a light blue shirt.

Turns out that the world’s best football striker Erling Haaland had taken over the Google search term “Halland”, as people have a hard time spelling his name. Yes, the two words Halland and Haaland are remarkably similar. And yes, for a global audience we do understand it can be hard to keep these two Nordic names apart.

The region of Halland will be forgotten

Visit Halland, the region's tourist organization, is our client. We’ve done fun stuff with them before, but this challenge was at another level. Taking on the 1.94 meter tall Norwegian bulldozer would demand we flex our (brain) muscles big time.

We discussed the situation with our friends at Visit Halland, and landed on an action plan: We were going to write a letter! Not just any old letter though: an open letter. The letter, titled Halland vs. Haaland, addressed the English people, global sports journalists and football fans all over the world:

“To our despair, we see that our efforts promoting Halland are being rapidly wiped away. All because of a great Norwegian footballer… We are Halland. He is Haaland. If nothing is done we fear our region is at risk of becoming a forgotten Atlantis, a place only known in stories and ancient scriptures”.

The letter went viral - across the globe

Jimmy Sandberg, the director of Visit Halland, posted the letter on LinkedIn. Swedish Fotbollskanalen found this interesting, did an interview with Jimmy and then a couple of other Swedish media outlets followed. Some Norwegian newspapers caught on. And then came that marvelous moment when the BBC got in touch. And from there, well it kind of snowballed.

About a week after the initial publication we’ve counted to over 100 publications all over the world. Media outlets in England, Norway, Germany, Italy, Spain, The Netherlands, Finland, France, the US, Nigeria, Ghana, Vietnam, Turkey, New Zealand and so on have all reported on the story. BBC, The Guardian, Daily Mirror, ESPN, Eurosport and Gazzetta della Sport were among the sources.

Swedish and Norwegian media did meta pieces on the Halland-Haaland story being a viral world phenomenon. After another three weeks the story has run in over 1 000 media outlets in 104 countries, with a total reach of 3 billion people. The PR-value of this is estimated to about 765 million SEK. Social media is impossible to keep track off, given the volume of posts and the problem itself: that people still can’t really tell the difference between spelling Halland and Haaland.

But maybe one sweet day they will.

Never underestimate the “Let’s give them something to talk about” aspect of PR and content.

There is still power in a well-penned letter.

What is a playbook? And why do you need one?

5 questions that reveal if your social media strategy is lacking